Seriously…”Journey to Love” has a very clear salvation message in it. I realize that it’s “just a story,” but God can use “just a story” to change lives. I’m praying that JTL will impact readers. Will you join me in prayer? Then, grab yourself another entry (though I’ll admit…I’d appreciate prayers for more than just today!)

These Seven Things
Proverbs 6:16-19 – These six things doth the Lord hate: yea, seven are an abomination unto him: A proud look, a lying tongue, and hands that shed innocent blood, An heart that deviseth wicked imaginations, feet that be swift in running to mischief, A false witness that speaketh lies, and he that soweth discord among brethren.
If ever there was a clear list given in God’s Word for abominations in His eyes, Proverbs 6:16-19 holds the key. It is distinct and unarguable. Above that, sadly, this list can be found in many believers’ lives.
– One Sowing Discord
“Discord – OT: 4090 medan, discord, strife”
The other use of this Hebrew word is Proverbs 10:12, Hatred stirreth up strifes: but love covereth all sins.
Having been a pastor’s daughter, I have seen examples of this last “of the seven abominations” in the church more than the others. Church members are relatively truthful, strive for humility, keep their feet from the paths of evil and their minds from wicked imaginations…but when something goes awry they are the first to sow discord in the church. God doesn’t just recommend it “doesn’t happen.” He finds it utterly distasteful. He knows the harm that it creates in His body for one member to be “warring against” another, and He hates it. Am I taking part in this abomination?

When you get on Pinterest and your sister has sent you fifty medieval pins. I think someone besides me is excited about dreams for a medieval story. Though a medieval story is still in the dreams/prayers, there’s nothing wrong with looking for ideas, is there?

View my growing board HERE.

ENTRY FOR 2/20 – Personally invite two people to sign up for this street team’s blog (then, they can be a part of this giveaway too!)

I’m getting off the computer–I promise I am (not saying HOW many hours I spent on here today)…but lookie! “Journey to Love” (Kindle edition) is now on Amazon, ready for pre-order! 😀
Order here: http://www.amazon.com/dp/B01BZ7S3PK

I’ve decided to do a giveaway–a special giveaway JUST for my street teamers (starting now, ending on release day, March 14). Because you are all so amazingly supportive and encouraging! I’ll be giving away at least one paperback copy of Journey to Love (if I have a lot of entrants, I just might make it two).

The way you can earn entries is simple: I will post a “challenge” for the day (this may not come every day, as some days I’ll be too busy to post here). If you do the challenge, then you can go to the giveaway link and enter it in.

ENTRY for 2/19 – RSVP to the Journey to Love Release Party on FB (You will have to ask me for an invite if you can’t access it. Aren’t on FB? It’s okay, you can still have one free entry 🙂 ) 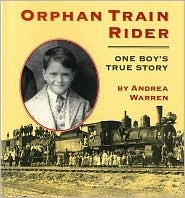 This week, I didn’t have any books I had to review…and actually, I haven’t finished a book since two Saturdays ago (perhaps I’ve been a bit busy). I’m stuck on an orphan train research book. While it has a lot of facts, that’s just what it has: facts (that are a little dry to swallow a lot at a time). But! Here’s an orphan train book that I recently read and really enjoyed–I give it five stars.

My Thoughts
So much information is packed into this short book. Warren paints a very detailed picture of the situations and circumstances different orphans faced. Warren follows the true story of one orphan, Lee, and adds historical references. I thought the book was very well-rounded. Though I’ve researched the orphan train saga, I learned a lot from these 72 pages. I would say that this is acceptable for all readers. There is one sentence that states that some orphans were physically and sexually abused, but other than that, I didn’t notice anything unacceptable. Some younger readers may not like the very real, dismal picture painted of the hopelessness of orphans in that time period.I thoroughly enjoyed reading this and found it helpful for research.

About the Book
Between 1854 and 1930, more than 200,000 orphaned or abandoned children were sent west on orphan trains to find new homes. Some were adopted by loving families; others were not as fortunate. In recent years, some of the riders have begun to share their stories. Andrea Warren alternates chapters about the history of the orphan trains with the story of Lee Nailling, who in 1926 rode an orphan train to Texas when he was nine years old.

My sister, Elizabeth, drew an adorable train for my chapter headers. I’m in love with it!!! 🙂 Working on ARC edits now! (the formatting is changing from what I have picture here)

Get to know two more important characters from “Journey to Love” – Celeste and Pastor Owens.

Celeste Thornton
Mary’s younger sister, Celeste, is cheery, chatty, and totally little girlish. She reaches out to Marie even though Marie never encourages the friendship.

Pastor Owens
Solid in the Bible, Pastor Owens is the faithful pastor of the church that Mr. and Mrs. Bowles attends. However, his words make Marie feel uncomfortable.

And he said, Lay not thine hand upon the lad, neither do thou any thing unto him: for now I know that thou fearest God, seeing thou hast not withheld thy son, thine only son from me.
Genesis 22:12
Abraham loved God enough to obey Him…above his only son. Yet how often do I struggle to obey God when it means sacrificing my dreams and projects for just a short time? Abraham obeyed, unable to see the future. Yet I like to balance the pros and cons before maybe, possibly, obeying. Oh Lord, help me to have a heart more dedicated to following You!!
~*~*~