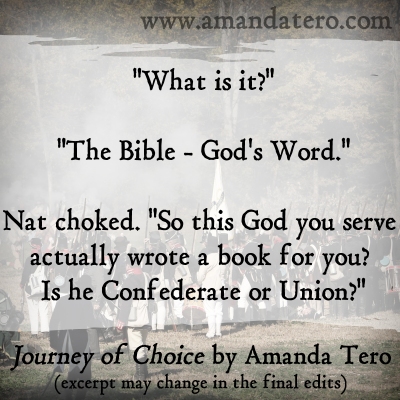 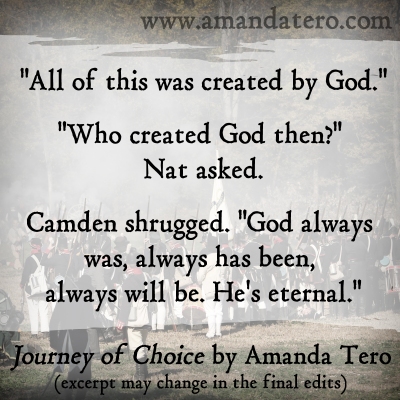 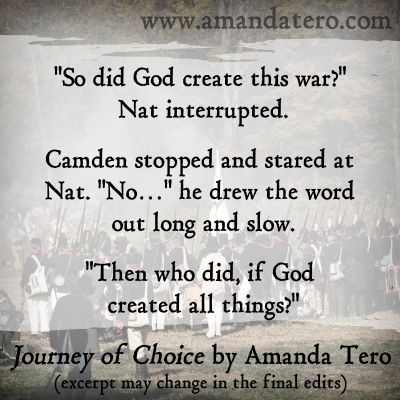 How would YOU answer Nat’s questions?

Y’all know me. I love any excuse for free things and discounts. 😉 So, it’s Black Friday. Let’s just throw on the fun! 😀 I’m joining several other Indie Christian authors with discounted books and free eBooks. Hop on over to see what all we have (disclaimer: I have not read all of these authors so cannot endorse them all).
A few of mine are ONLY FREE TODAY! So you have to get them fast!
Letters from a Scatter-Brained Sister | Coffee Cake Days | Me? Teach Piano? 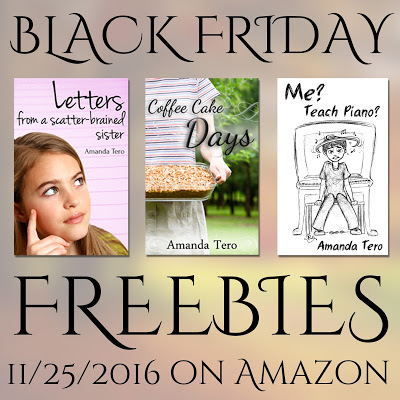 And these are free/discounted for the weekend until Cyber Monday.

Grab yourself some copies, then spread the news! 🙂 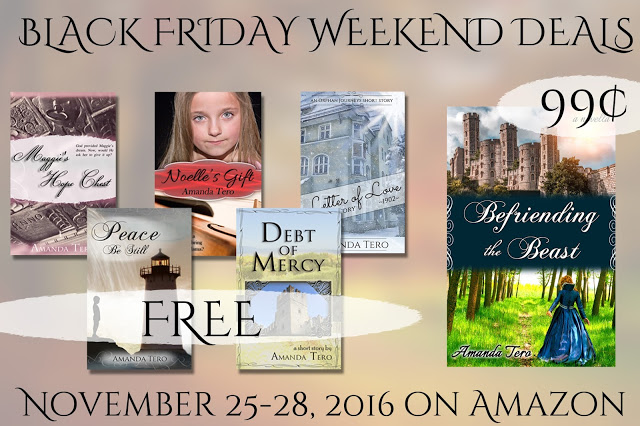 Also, my paperback books are discounted. 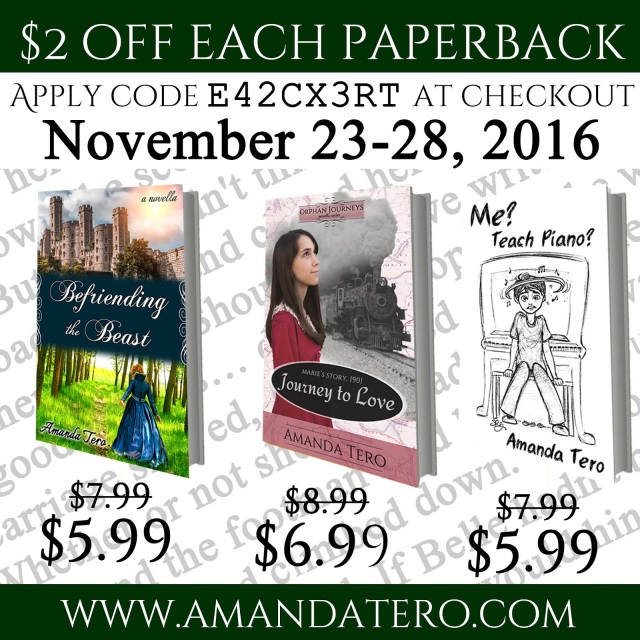 Here are the links:

Journey to Love
Befriending the Beast
Me? Teach Piano?

Apply the discount code E42CX3RT for $2 off each paperback book! 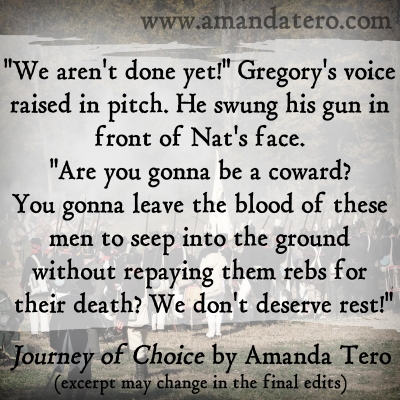 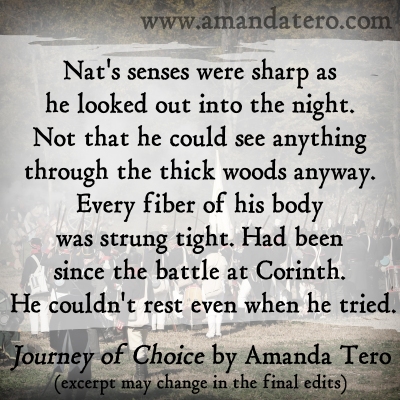 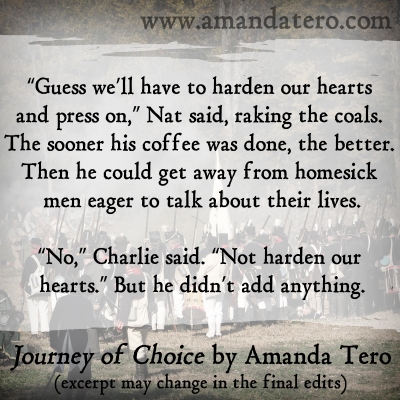 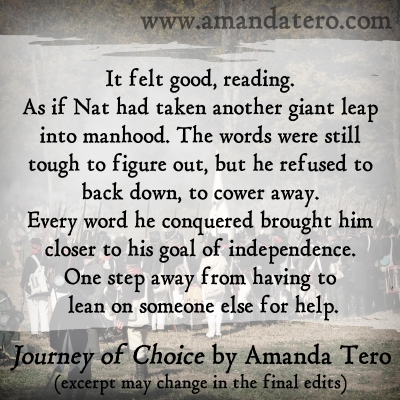 Envisioning the battle…
Honestly, reading up on what our brave ancestors went through, I feel like I just cannot do their service justice. But to imagine the battle, men in action… it is sobering and exhilarating. 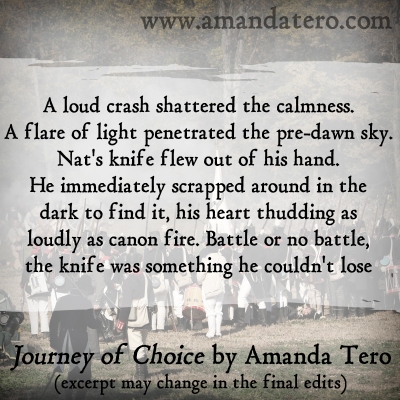 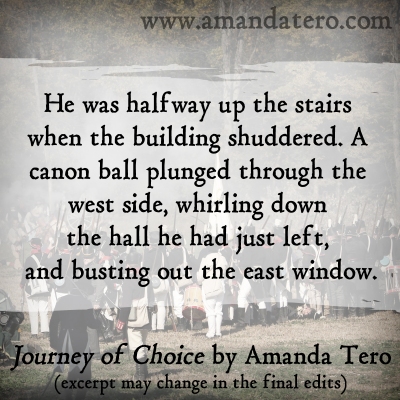 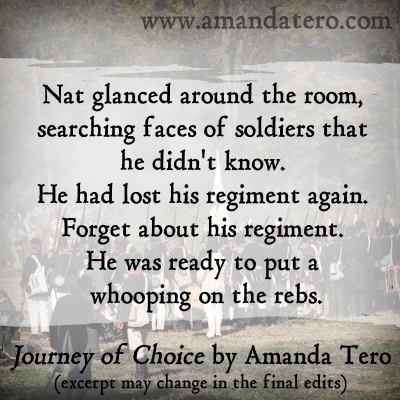 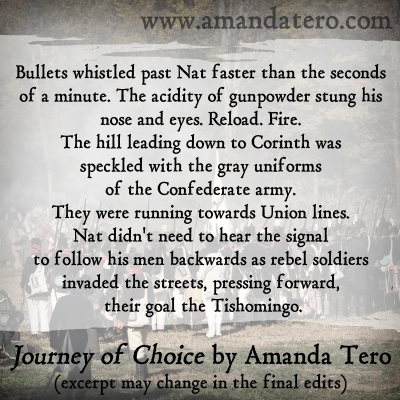 If you’re subscribed to my writing newsletter, then you know that nope, I’m not doing NaNoWriMo this year. 🙂 I haven’t done it yet, actually, as Novembers tend to be super busy for our family. BUT… I am going to try really hard to get 20,000 words done in Choice. Already I’m lagging a little behind and need to step it up. Prayers really appreciated as I’m in the home-stretch! 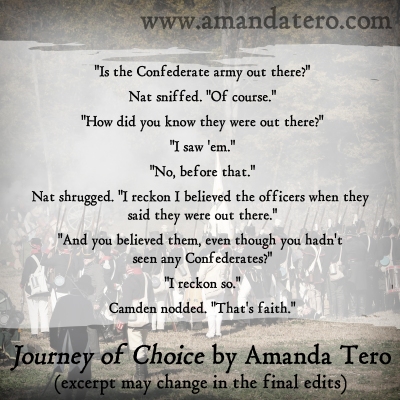 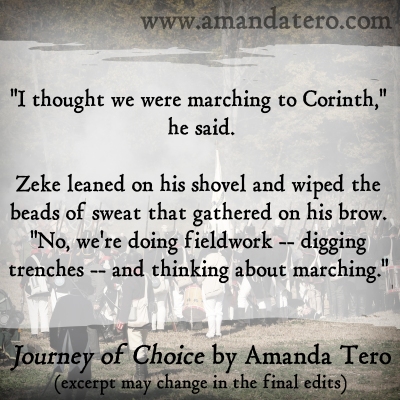 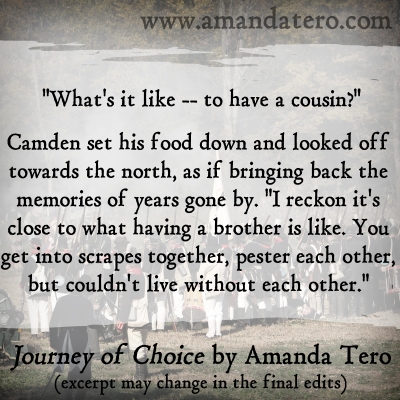 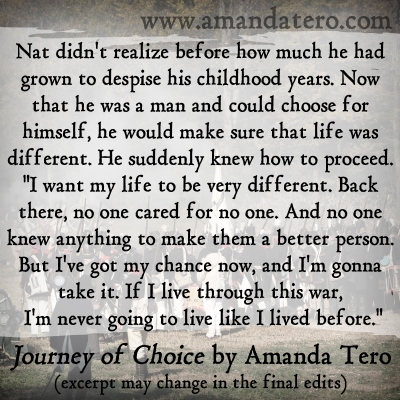 What is one of your favorite things about the Civil War era?

Time for more quotes! One of the things that I “dreaded” the most about writing Choice was the battle scenes. I’m not so sure I’m doing a swell job with the rough draft, but it’s coming. In fact… I think I like writing fighting scenes! 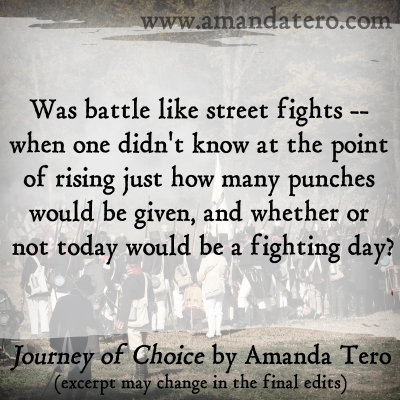 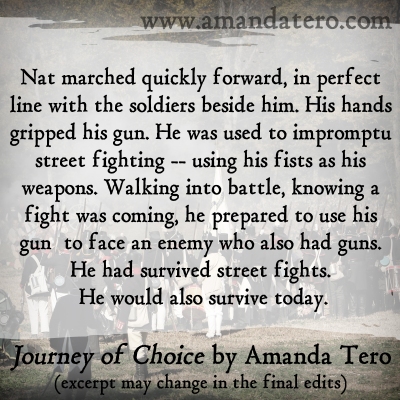 The following quote about the Hornet’s Nest is true history. A regiment is supposed to be 1,000 men. From what I’ve researched, The 18th Missouri never really reached full strength. But after the Hornet’s Nest, there were only about 300 men left in the regiment who were not killed or captured.

*spoiler alert* Yes, one of my characters that is close to Nat ends up captured by the confederates in this chapter! 🙂 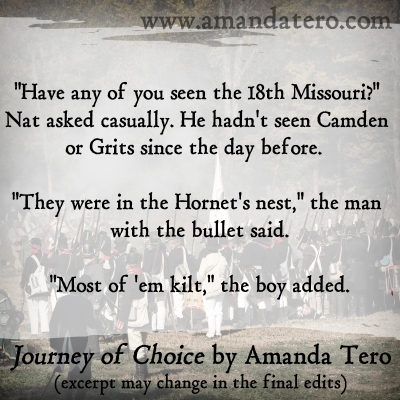 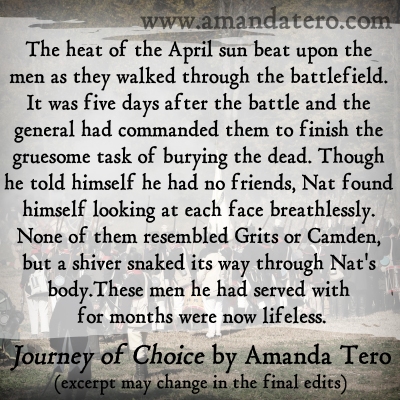 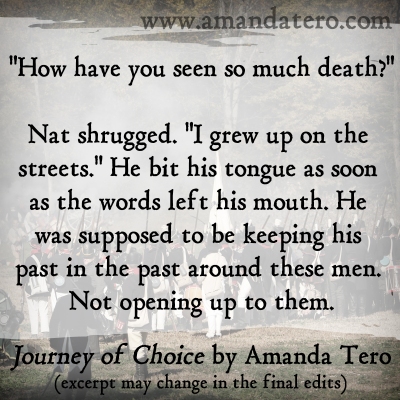 #indieauthor #indieauthors #christianwriters #christianauthor #writersofinstagram #authorfeature #indiebook #bookstagram #newbook
From a Reviewer: "I like the message of faith and hope that shines through. In the story, twelve-year-old Marie experiences Jesus' love and grace like no other time in her life; it's an eye-opening experience for Marie, and hopefully for the reader as well. It shows that what most of the children on Orphan Trains went through wasn't just a geographical journey, but a spiritual one as well." (Tarissa, on Goodreads)⠀⠀⠀⠀⠀⠀⠀⠀⠀ ⠀⠀⠀⠀⠀⠀⠀⠀⠀ #bookquotes #journeytolove #orphantrains #historicalfiction #yafiction #yareads #readmorebooks #youngadultbooks #booknookstagram #instaread
“And Jacob awaked out of his sleep, and he said, Surely the Lord is in this place; and I knew it not.” Genesis‬ ‭28:16‬⠀⠀⠀⠀⠀⠀⠀⠀⠀ ⠀⠀⠀⠀⠀⠀⠀⠀⠀ At this time, God had told Jacob, “I am with thee, and will keep thee in all places whither thou goest…” (verse 15). Until this point, Jacob thought he was traveling alone, facing the future alone, and responsible for his decisions alone. It still took him years to fully embrace what the presence of God meant, but let’s bring it back to this point. Just because Jacob didn’t know that God’s presence was there, did not mean that God was absent. Just because Jacob hadn’t been thinking of God, didn’t mean that God was never there. As believers, we have the promise that Jesus will never leave us or forsake us. But we might get into situations like Jacob, where events of life are piling up on us and pressures are causing us to fear in one way or another. We may get our focus entirely off God, but that does not cause Him to leave us. Even when we forget to think about God, He never forgets to think about us. His presence surrounds our every aspect of life, even when we don’t feel it. Like Jacob, maybe we need a God-reality check. How much comfort there is in believing the fact of God’s presence in our lives! And how much peace it brings in times of distress in our lives. He never leaves us or forsakes us.⠀⠀⠀⠀⠀⠀⠀⠀⠀ ⠀⠀⠀⠀⠀⠀⠀⠀⠀ #inspirational #christian #christianlife #christianliving #kjv #bibletime #devotional #foodforthought #thoughts
There are many “buts” in our life. The “buts” are generally... excuses. “I would do this, but...”⠀⠀⠀⠀⠀⠀⠀⠀⠀ ⠀⠀⠀⠀⠀⠀⠀⠀⠀ The other day, I found a very interesting “but” in God’s Word. "From the first day of the seventh month began they (Israel) to offer burnt offerings unto the LORD. But the foundation of the temple of the LORD was not yet laid." (Ezra 3:6)⠀⠀⠀⠀⠀⠀⠀⠀⠀ ⠀⠀⠀⠀⠀⠀⠀⠀⠀ Israel was coming from the pagan enemy’s land to rebuild the temple by decree of King Cyrus (see Ezra 1:1-3). Almost immediately when they returned to Jerusalem, the city of the temple, they began sacrificing to God. ⠀⠀⠀⠀⠀⠀⠀⠀⠀ ⠀⠀⠀⠀⠀⠀⠀⠀⠀ Nothing hindered their service to the one true God. Not even the fact that the temple was not prepared or ready!⠀⠀⠀⠀⠀⠀⠀⠀⠀ ⠀⠀⠀⠀⠀⠀⠀⠀⠀ As I read this captivating story of Israel’s return to God, I began to realize that there are many “foundations” I am placing as prerequisites for my service to God. Things that in my eyes make sense, but in reality are a just an excuse for my disobedience to God’s gentle prodding. ⠀⠀⠀⠀⠀⠀⠀⠀⠀ ⠀⠀⠀⠀⠀⠀⠀⠀⠀ It can be as easy as, “Lord, if you answer this prayer, then I will...” or, “Yes, Lord, I see that I should do this, but I must wait until tomorrow,” or as far-sighted as, “Lord, I’ll do this, but it makes sense to be married first.” ⠀⠀⠀⠀⠀⠀⠀⠀⠀ ⠀⠀⠀⠀⠀⠀⠀⠀⠀ When we feel God’s leading, we do not need the “foundation of the temple” to be set in order before we begin. We can begin as soon as He tells us.⠀⠀⠀⠀⠀⠀⠀⠀⠀ ⠀⠀⠀⠀⠀⠀⠀⠀⠀ What “foundation” are you waiting for before giving your life, your possessions, and your time to God?⠀⠀⠀⠀⠀⠀⠀⠀⠀ ⠀⠀⠀⠀⠀⠀⠀⠀⠀ | Originally published October 13, 2013 |⠀⠀⠀⠀⠀⠀⠀⠀⠀ ⠀⠀⠀⠀⠀⠀⠀⠀⠀ #whatareyouwaitingfor #waiting #servegod #servegodnow #servinggod #obey #obedience #donotdelay #doitnow
#fictionfeaturefriday || OLIVIA LYNN JARMUSCH ||⠀⠀⠀⠀⠀⠀⠀⠀⠀ ⠀⠀⠀⠀⠀⠀⠀⠀⠀ ABOUT THE BOOK: Vanessa Bennett is living in a real-life fairytale. Now that she's engaged to the man of her dreams, The Palace Staff is consumed with wedding preparation. The upcoming event is no small affair, as Vanessa is bombarded with hundreds of decisions she needs to make before the wedding date arrives. Amidst the endless details concerning dresses, decorations and napkins, a greater question looms: is Vanessa truly ready to become Queen? As tensions rise within Tarsurella, the role of joining her betrothed in governing an ever-shifting nation is no small task. Will she crack under the pressure?Meanwhile, Jane Akerly is hoping to awaken from a nightmare. Her father has been missing for months. Advised to accept the harsh reality that he may never return, Jane isn't ready to give up. She finds comfort in the one place she's always run to for escape-her daydreams. Her imagination has the power to carry her across the ocean, stroll the streets of London, and imagine that all is well. In an unexpected turn of events, Jane is given the opportunity to create the future of her dreams-but will her pen be enough to save her? The Wedding is Book #3 in The Tales of Tarsurella Series.⠀⠀⠀⠀⠀⠀⠀⠀⠀ ⠀⠀⠀⠀⠀⠀⠀⠀⠀ ABOUT THE AUTHOR: I’m a twenty-something author, singer, and songwriter. I enjoy crafting YA Christian fiction that is pure, lovely, inspirational, and of course, entertaining! When I’m not writing, you can usually find me playing guitar, blogging, drinking peppermint tea, connecting with new friends, planning my next trip to Disney, or pinning images of Europe and Golden Retriever Puppies.⠀⠀⠀⠀⠀⠀⠀⠀⠀ ⠀⠀⠀⠀⠀⠀⠀⠀⠀ #wedding #thetalesoftarsurella #fiction #christianfiction #womensfiction #indieauthor #indiewriter #indieauthor #tbr
.⠀⠀⠀⠀⠀⠀⠀⠀⠀ .⠀⠀⠀⠀⠀⠀⠀⠀⠀ .⠀⠀⠀⠀⠀⠀⠀⠀⠀ . ⠀⠀⠀⠀⠀⠀⠀⠀⠀ #indieauthor #indieauthors #christianwriters #christianauthor #writersofinstagram #authorfeature #indiebook #bookstagram #hopechest